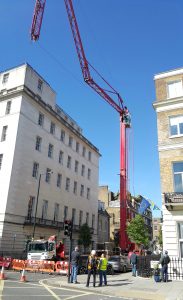 During a routine PPM visit to the Nursing and Midwifery Council in Portland Place, we identified a leak in the air-cooled chiller system which would severely compromise the building’s air conditioning if left. We were able to intervene and, using our experience of working in central London, negotiate the necessary permissions to crane the old refrigeration coils out and the new ones in.

Darenth Valley Building Services has held the PPM (planned preventative maintenance) contract at Portland Place since 2010.  We attend on a weekly basis to provide a full Mechanical and Engineering service to this six storey, listed building in central London, as per the agreement.  Despite the PPM contract coming up for renewal on a bi-annual basis, we have successfully retained it each time, creating a nine-year (going on ten having just retained the contract for the fifth time) relationship with both the appointed building surveyors, Leonard Engineering and the landlord and client The Nursing and Midwifery Council. 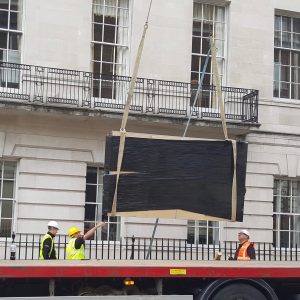 The PPM contract, by its very nature creates a lot of remedial maintenance works at the building, as well as the routine maintenance such as fire alarm systems, boiler maintenance, air conditioning systems etc.  It also highlights large scale maintenance that is often very reactionary – requiring us to respond quickly and appropriately, often pre-empting large scale problems with large scale preventative maintenance.

One such project came from our regular servicing of the air cooled chiller system – this cools the water for the four pipe fan coil system throughout the building. When our engineers carried out maintenance checks to the air cooled chiller condensers, they discovered that the coils within the chillers were starting to fail.   The original refrigeration manufacturer’s coils had been in situ since day one but age, the resultant vibration and general wear and tear had caused a leak from the middle section.

Malfunctioning of the coils would result in the loss of 95% of the buildings air conditioning so replacing them before they resulted in a building shutdown was crucial.

Acquiring the relevant permissions for the required works was of vital importance.  In total, three ‘permissions’ were necessitated:

Removing coils by craning them down from six storeys high and returning new, prefabricated coils required a huge amount of planning and organisation.  Road closure (1) was imperative, however the Marylebone area houses a large amount of diplomats and embassy staff and so closing roads became a matter of government security and red tape, however it was crucial in order for the crane to gain access.

After the necessary permissions were granted, the road was then required to be load tested (2), ensuring it could take the weight of the crane without damage to the road surface and under croft, located directly below the road.  Only on the confirmation of this could we progress by contracting crane company City Cranes and ensuring they had the necessary crane licence (3) to carry out the intended works. 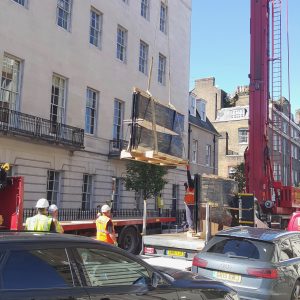 Safety officers from both Darenth Valley and Leonard Engineering were present at every stage of both the removal of the old coils and the positioning of new ones.  Once lifted into place, the chiller was rebuilt with the new coils and charged up with refrigerant, as per Refcom (Fgas) regulations.  The coils were then pressure tested independently before the machinery underwent a full system test.

With the installation of such superior units our client welcomed a more energy efficient, cost efficient system.

A job that could have been complicated was completed within a day due to our project management skills and our broad knowledge of the complexities of working in London.  Not wishing to close the road for longer than necessary meant that the project had to flow seamlessly once permissions were given.

On the basis of how we handled the project, Leonard Engineering has now instructed our sister company D Hammond to undertake the full outside refurbishments.